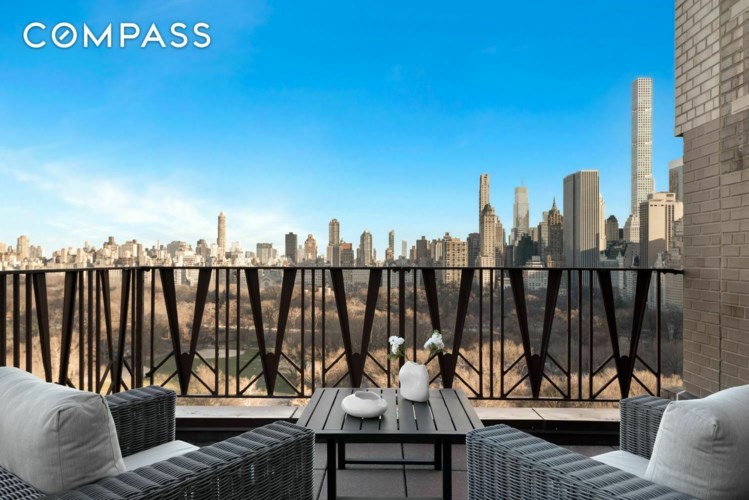 Seize this once in a lifetime opportunity to make this very special home your own. First time on the market at the iconic Century Condominium, Apartment 20Q combines coveted outdoor space and generous interior square footage with unobstructed views in a highly desirable and well-located prewar condominium. Measuring 2,521 square feet, the residence comprises open loft-like living space, kitchen, three generous bedrooms and three original art deco bathrooms--two with separate stall showers and dressing rooms. A corner terrace stretches 70' along the northern perimeter of the residence and overlooks the park with captivating views to the east, south and north. With eight windows directly facing Central Park and another six windows overlooking the terrace, natural light abounds. High ceilings, abundant closets and a shared private elevator landing complete the picture. With a renovation, this one-of-a-kind property is the ultimate trophy and not to be missed. Developed by Irwin Chanin in 1931, the art-deco styled Century fronts the entire block between West 62nd and West 63rd Streets on Central Park West. The twin-towered, beige brick structure, a part of the Central Park West Historic District, was recognized by the U.S. National Register of Historic Places in late 1982 and designated a local landmark by the NYC Landmarks Preservation Commission in 1985. Well known for its white glove service, the condominium has three attended entrances, six elevator banks, concierge, resident manager and on-site management. Private storage is available for a fee. Monthly common charges include electric utilities. A transfer fee of six months of common charges is payable by the purchaser. Convenient to bus and train transportation, multiple restaurants, Time Warner retail options and Lincoln Center, this highly desirable condo is the only prewar condominium on Central Park West south of 92nd Street.

Thank you! Your message has been sent.

$0 per month
Year Fixed, Interest
Principal and Interest
$0
Property Taxes
Homeowners' Insurance
Home Price
Down Payment
*This Payment Calculator is intended for educational and planning purposes only.
**Assumes 3.5% APR, 20% down payment, and conventional 30-year fixed rate first mortgage. Rates cited are for instructional purposes only; current rates are subject to change at any time without notice. You should not make any decisions based simply on the information provided. Additional required amounts such as taxes, insurance, homeowner association dues, assessments, mortgage insurance premiums, flood insurance or other such required payments should also be considered. Contact your mortgage company for current rates and additional information.


Note: All room dimensions, including square footage data, are approximate and must be verified by the buyer. The information contained herein is furnished by the owner to the best of his/her knowledge but is subject to verification by the purchaser, and agent assumes no responsibility for the correctness thereof. The sale offering is made subject to errors, omissions, change of price, prior sale, or withdrawal without notice. In accordance with the Law, this property is offered without respect to race, color, creed, national origin, sex, familial status or disability. This is not intended to solicit property currently listed.